Wednesday afternoon I decided to take a road trip to the wineries out East. It’s been a while since I spent a weekday afternoon at the wineries and the vibe was much different than a weekend outing. For one thing many of the tasting rooms were closed Wednesday and at the ones I stopped by, I was the only customer in the place. But that’s OK since I don’t have to elbow my way to the tasting table and the pourers weren’t frazzled and cranky and I can have a chat with them about the wines.

First stop was at Shinn Estates Vineyards at 200 Oregon Road in Mattituck. There is a house dog, in the tasting room, a border collie who is very friendly and likes to chase things. On the weekends she has plenty of people to play with but since I was the only person in the tasting room this day, she was very attentive and frisky. While I was tasting the wines, she kept bringing whatever she could find around the room like branches in order for me to throw. 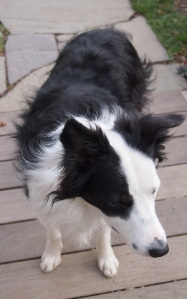 I had their 2011 unoaked Chardonnay which had nice tight fruit with crisp acidity on the finish. I also had their 2009 Estate Merlot with was dark in color and had a nose of cooked black cherries, smoky chocolate fruit with tongue tingling tannin and acids on the finish.

Next stop was Mattebella Vineyards at 46005 Main Road. It’s one of the newest tasting room to open out East and the room is a small cottage, a very small cottage and the flight consisted of six of their wines. I had the 2009 & 2010 Chardoannay. Both with minimal oak aging and I prefered the ’10 which had a nose of vanilla with a clean, crisp easy drinking finish. The 2011 Rose which is mostly Merlot with a bit of Cabernet Franc was Salmon colored with a nose of cherry pixie-stix with a clean, neutral finish. They poured the 2007 & 2008 Old World Blend which is a Bordeaux Blend. 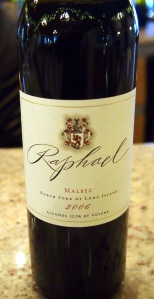 Driving West bound the next winery was Raphel Vineyards at 39390 Main Road. Another of the newer wineries, this winery has the most distinctive tasting room out East. The place was built to look like a Tuscan Villa and it’s no accident that a lot of wedding receptions are held hereif fact every time I tried to stop by on a weekend the place was closed for a private affair, it’s a huge place.  I had their “Library Tasting”. The 2006 Petite Verdot was black with a nose of dusty, dark chocolate. The 2006 Malbec was dark with very tight fruit and a balanced finish and the 2006 Cabernet Sauvignon was black with a nose of dusty black cherry with very tight fruit with dropped at the finish. 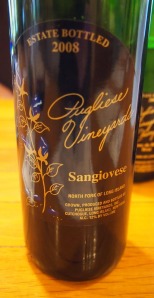 Last stop was Pugliese Vineyards at 34515 Main Road. Pugliese is one of the founding wineries out East established in 1980. It’s a family run operation and there’s always a family member pouring in the tasting room. This day the matriarh and her daughter were doing the honors. It’s a quirky little winery that produces some decent sparkling wines usually poured out of hand-echted bottles and the only Sangiovese that I know on the island. The 2003 Blanc de Noir was crisp with good fruit and drinking nicely and the 2008 Estate Sangiovese was dark red with some juicy fruit.