This past Wednesday I took a road trip to Boston to attend a Guild of Sommelier seminar on wines of the Roussillon region of France. Roussillon is a wine producing region in South East France bordering the Mediterranean on one side and Spain on the other. The region is famous for their fortified wines called vin doux natural. In fact the region produces over 90% of France’s fortified wines, several of which we tasted at the event.

The event was held at Moksa restaurant in Cambridge which despite the name, is a sushi restaurant just a stones throw south of Harvard University. It was a sit-down tasting with about a dozen people.

We tried ten wines and we started with a white. The 2009 Domaine Gauby Vielles Vignes is a blend of five grapes and was light yellow with a nose of sweet mushrooms. Medium weight fruit with mineral and candy undertones with nice acidity on the finish. It smelled sweeter than it tasted, interesting.

We then had a flight of three dry reds. The 2010 Domaine Piug-Parahy Georges was a blend of four red grapes and was medium red with a purple robe with a nose of cherry cough drops with bright juicy fruit and some earth on the crisp medium to long finish. Very drinkable. The next wine was the 2010 Chateau Saint Roch Chimeres. A blend of three grapes, it was black purple in color with stemmy cinnamon and black fruit on the nose, it was chunky with some oak and dark fruits on the chewy finish. The 2008 La Coume Del Mas Quadratur was also a blend of three red grapes. It was black purple in color with a nose of barnyard and black cherries and oak with velvety but tight fruit with alcohol peeking through at the end. I though the alcohol made the wine unbalanced. 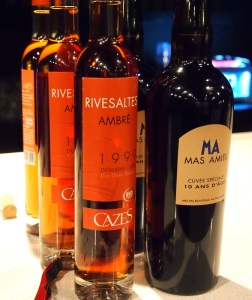 We tried the fortified wines next. First up was the 2009 M. Chapoutier. Mostly Grenache it was dark red with a nose of stewed dark fruit. Chewy with restrained sweet coffee and chocolate on the finish and great balance. Very tasty. The 2009 Domaine La Tour Vielle was mostly Grenache as well and was black with a slighty closed nose of fresh figs with juicy sweet fruit. The 1998 La Coume Du Roy was amber in color with a nose of caramel, dark chocolate and dried figs. Nutty and mouthfiling with great balance. Very nice. The Mas Amiel Cuvee Speciale 10 Ans D’Age was brown with a nose of chopped nuts and figs with nuts and iron minerality on the finish. The 1999 Domaine Cazes was 100% Grenache Blanc and was similar to a 20 year Tawny. Amber in color with an oxidized, nutty nose and almonds on the finish.