I started the tasting at Union Square where they were having their “Grand Tasting”. Not much blew me away but I did enjoy the 2010 Louis Latour Montagny “La Grande Roche”.  Aged in Stainless Steel, it was dry and crisp with some very nice minerality. It’s a nice budget white Burgundy from the Cote Chalonnaise.

Le Du’s had their Grand Italian Tasting event. I started with the whites. Some that I enjoyed were the 2010 Fontezoppa Verdicchio with a nose of slate and wet stone and some concentrated, tropical fruit on the finish. The 2010 Il Casolare Verdicchio had a golden hue with medium tropical fruit 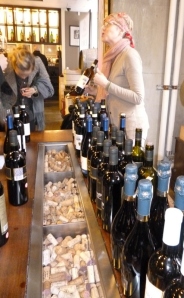 notes with a long, crisp finish. I like a dry Lambrusco and they poured an excellent one at the tasting.

The 2010 La Battagloia Lambrusco was refreshingly dry and crisp with earth notes on the finish. I liked it so much I picked up a couple of bottles. I like Italian reds, they have their own unique flavor profiles that set them apart from other wines. Some of the reds I liked at the tasting were the 2009 Roddolo Dolcetto D’Alba with a nose of dark chocolate and damp earth with crisp acidity on the finish. The 2008 Caprandole Rosso Toscano (100% Sangiovese) had a nose of dark plums, red roses and damp earth fruit with crisp acidity and a long finish. The 2007 Pacina Chianti Colli Senesi had a nose of tar and violets, velvety fruit and a long, lip-smacking finish. 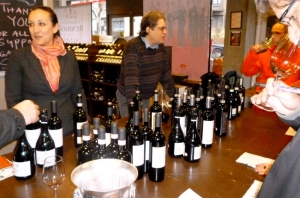 Pietranera was made in a rustic style with a beautiful nose of dark plum and barnyard with chewy earthy fruit and a persistent long finish while the Ramoni had a nose of cooked earth and black plums with velvet fruit, great balance with notes of damp earth and a long finish.

The most unusual red I had that night had to be the 2010 G.B. Burlotto Freisa. The Freisa varietal is grown in the Piedmont section of Italy and  is one fo the oldest  Italian grape varietals. The varietal has a parent-offspring relationship with the Nebbiolo grape. The Burlotto was medium to light bodied with a smokey and earthy finish.