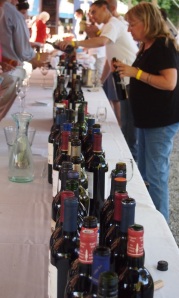 Saturday night I travelled out East to Lenz Winery which is located on Route 25 in Peconic, to attend their 23rd annual Merlot World Classic. Not surprisingly it was a tasting event that featured about 50 different Merlot from the East End and from other states and countries. Lenz  winery established in 1978, is one of the founding fathers of the Long Island wine industry and are known for their Merlot.

It was a beautiful late Summer afternoon and the tasting took place in a tent outdoors. Other than the wines being poured, they served some cheese and salami although a nice steak would have went really well with all that Merlot being poured.

I made a bee-line to the California table and started the day tasting the most expensive wines at the event. Past experience has taught me that those were the wines that would be gone first, I had a trio of some very nice juice.

The 2007 Twomey Napa Valley Merlot was very nice, dark red with a nose of crushed blackberries and mint with dusty mouth filling fruit but restrained with great tannins/acid balance on the finish.

The 2010 Plumpjack Napa Merlot was much more of a  fruit bomb than the Twomey. Black, thick and jammy with firm tannins on the finish. I think it needs more time in the bottle for everything to come together.

The 2009 Shafer Napa Valley Merlot was medium dark red with red floral notes on the nose, chewy velvety fruit with nice balance on the finish. 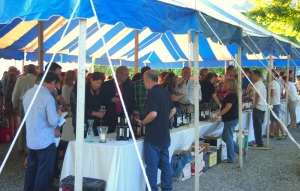 After sampling the three high-end Cali Merlot I made my way to the French table.  I enjoyed a couple of the right-bank Bordeaux. The 2001 Chateau Simard was showing very well. Brick red with a nose of stewed red fruits and mint, nice dusty fruit on the palate with good balance. It’s nice to try wines with some bottle age and there were a few of those at this tasting this afternoon. This wine was drinking nicely now and I wouldn’t hold on to it for much longer. The 2009 Chateau de Sales had a nose of  green olive and toasty oak with tight and concentrated fruit. 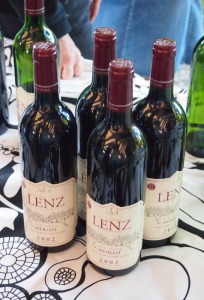 I then decided to sample  the local wines. Since I was at Lenz Winery I started at their table first. They poured the 2002 Old Vines Merlot. Another wine with some bottle age, this one was dark red with stewed bright fruits on the nose, velvety fruit with a nice balance of tannins and acids on the long finish. Nice job.

Mattebella Vineyards is pretty new on the LI wine scene, they opened their tasting room this year.  They poured the 2007 Old World Blend which is 84% Merlot with the rest Cabernet Sauvignon and Cabernet Franc. Dusty cinnamon and spice on the nose, woodsy fruit and nice balance. The 2008 Old World Blend came from a leaner year which explained the tighter fruit.

The 2005 Jamesport Estate Merlot Block E was medium to dark red with a nice nose of dusty black cherry, the fruit on the lighter side with crisp acids on the finish.

Wolffer Estate Vineyards poured a couple of interesting wines. Their 1998 Estate Selection Merlot was dark red with elegant fruit with some alcohol peeking through on  the finish, it is aging well.  They poured the 2010 Christian’s Cuvee which will be available next year. At $100 a pop I had some high expectations for the wine. 100% Merlot made from their oldest vines, very big nose of black cherry, silky fruit with a hint of acid on the finish but a smooth long finish. Very nice wine.