This past Saturday I attended the Wine Riot tasting held at the 69th Regiment Armory on Lexington Avenue.  Wine Riot is a walk around tasting event that is held in Boston, Chicago, Los Angeles and D.C. These consumer tastings usually turn into drink fests with boatloads of mid-level wines and people looking to party. I wasn’t expecting a serious wine tasting. On Saturday they had afternoon and an evening session as well as a session Friday night. I attended the afternoon session.

The event was targeted to the 20ish-30ish crowd, a fact that was made evident to me when I tried to get a tasting sheet to write notes on. There were no tasting sheets because it was assumed that you would take notes on an “app”. Now for people of a certain age, an app was something you had before the Veal Parmigiano came out. So I basically had to scribble notes on any business card I could get my hands on. Also the glasses the provided were “surgical grade” plastic stemless glasses. As a rule, I don’t like to drink wine from plastic but I suppose at an event liek this with a lot of amateurs and unlimited wine for four hours, it was probably for the best. I hate the stemless glasses. They are awkward to hold and I’ve spent a lot of years perfecting the proper twirl with a stem glass. No food was provided but there were some vendors selling food. 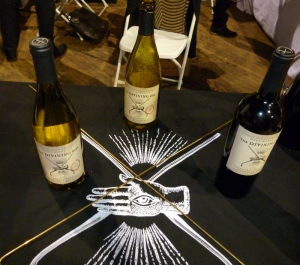 There were few familiar names at the event but I had a few favorites. Steele Winery from Lake County appellation in California had some nice wines. Their 2010 Pinot Blanc was creamy, buttery and toasty. The 2011 Shooting Star Chardonnay (their second label) had tropical fruits on the nose and was much leaner than the Pinot Blanc. The 2009 “Writers Block” Malbec was tight with notes of roasted coffee. Their 2009 “Outcast” red blend was black in color with a big nose of chocolate mint and crushed blackberries with roasted coffee on the finish as well as some heat peeking through on that finish.

I liked the 2009 Garnacha from Las Rocas, Spain. Juicy and earthy with a firm, crisp finish.