On Wednesday I attended Spain’s Great Match trade wine event which was held at the Metropolitan Pavilion located at 125 West 18th Street. The Met Pavilion hosts many events and I’ve attended many a wine tasting at this space.

The trade event was in the afternoon and there was a consumer event in the evening. I attended the trade portion of the tasting. It was a huge event with the usual charcuterie and cheese laid out for the trade, though the trade must have been very hungry since there was always a line at the food tables. One small room on the side was dedicated to wines from the Ribero del Duero, a wine region about 75 miles north of Madrid. Tempranello (local name Tinto Fino) is the big grape varietal in the region. Some of the Ribero del Duero wines I enjoyed included the 2007 Montecastro, the 2006 Callejo Reserva, the 2008 Tinot Pesquera Reserva, the 2006 Pagos Quintana Reserva and the 2001 Alenza Gran Reserva. At that part of the room they had a table with someone slicing bits of Iberico ham off a hock. That ham is outstanding and I spent a good part of the evening with a glass of red in one hand and a sliver of ham in the other.

I decided to sit-in at the Rioja seminar. It was hosted by the enthusiastic Steve Olson and they poured some very good juice. Eight Rioja wines were tasted as well as a sparking wine as a starter.

The starting sparkler was the 2011 Bodegas Muga “Muga Rosado”. It was light pink, dry and crisp. A nice wine to cleanse the palate after drinking all those reds at the main tasting.

The 2006 Bodegas CVNE “Contino Graciano” made with the Graciano grape which I was told represents only 2% of the plantings in Rioja. It was black with dusty, floral and oak on the nose with dry juicy fruit and good balance.

The 2008 Bodegas Palacios Remondon “Propiedad” was medium to dark red in the glass with a nose of sour graphite, tight fruit and sour black cherry on the finish.

The 2005 Baron de Ley Siete “Vinas Reserva” was one of my favorites of the flight. Dark in the glass, big nose of black fruits and slate, silky firm fruit and a long finish. Interesting and complex, very tasty.

The 2006 Familla Martinez Bujanda “Finca Valpiedra” Reserva was black with sweet mint and stewed fruit on the nose with tart fruit and a mouthful of tannin. I thought it was a little unbalanced. 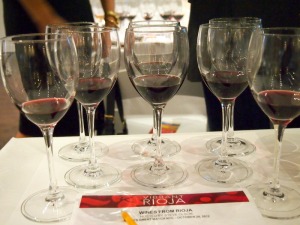 The 2005 Bodegas Luis Canas “Hiru 3 Racimos” was another of my favorites. It was black with a slightly closed nose of pickle juice it was thick, juicy and silky with nice acids on the long finish.

The 2006 Finca Allende “Calvario” was black with a nose of black fruit and toast, tight plums on the long finish with a touch of heat at the end.

The 2005 Bodegas LAN “Culmen Reserva” was another favorite.  Black with a stinky nose of slate and pencil shavings with chewy, velvety fruit and great balance and grip on the long. Very nice.

The 2001 Vina Ardanza “Reserva Especial La Rioja Alta” was the last of the flight had a brick color with a nose of pickle juice with tart and tight fruit.