This past Wednesday afternoon I attended a tasting organized by the Rhone Rangers. According to their website the Rhone Rangers are a non-profit organization “dedicated to promoting American Rhone varietal wines and American rhone-style wines made from the same grapes that have flourished for centuries in France’s Rhone River Valley”. To become a member of the Rhone Rangers  the winery has to apply for membership and bottle a wine in which at least 75% of the wine content include one or more of the twenty-two traditional Rhone grape varieties as approved by the French government for the wines of the Cote du Rhone.

Most of the wineries were from California but Virginia and New York State were represented as well. The event was held at City Winery which is located at 155 Varick Street. There was a trade tasting in the afternoon and a consumer tasting later that evening. I attended the trade tasting and there was no better place to be during a snow storm than in-doors drinking good juice. The storm did keep people away though, the event wasn’t very crowded and I was told that the consumer tasting wasn’t very crowded as well. For eats they served the usual trio of salami, cheese and bread. 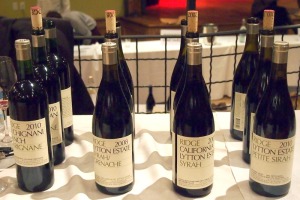 I like wines made from the Rhone varietals especially New World wines. Something different to drink than the usual Cabernet or Chardonnay. I tried whites made from Grenache Blanc, Roussane, Marsanne, PicPoul Blanc and Viogner. A lot of wineries bottle a Viogner but the other grapes aren’t bottled as a varietal too often and are used in blends. Some of the wines I liked:

From Tablas Creek Vineyard I had the 2011 PicPoul. It had a slightly closed, interesting nose of burnt rubber. Stark Wine 2011 Grenache Blanc”Saarloos Vineyard” had a nose of peaches and mango with moderate fruit and a smoky finish. Cypher Vineyards 2011 Grenache Blanc had a nose of white flowers and peaches, very dry with a crisp lemony finish. Villa Creek Cellars 2010 Roussanne had a nose of green fruit and mango and a full body. The  2009 Qupe Roussanne had a big nose of mango, peaches and hazelnuts. The 2008 Kenneth Volk Roussanne Paso Robles had a big nose of mango and cinnamon with full, firm fruit.

On to the reds. Ridge Vineyards poured a few of their reds. They source from old vine fruit and are know for their blends. I tried the 2010 Carignan “Buchignani Ranch” which is 100% old vines Carignan. I thought it was dry and tight with bright fruit. The 2010 Petite Sirah “Lytton Springs”  is a blend of four grapes and was black with a dry, dusty finish.  The 2008 Syrah/Grenache “Lytton Estate” had a nose of sour cherry and dried rosemary with balanced fruit and dried herbs on the finish. The 2007 Syrah “Lytton Estate” was black with a big nose of red roses and slate with silky fruit and great balance. Very tasty.

Tablas Creek Vineyard poured a 2010 Counoise. An obscure blending varietal from Southern Rhone that I’ve never seen bottled on its own, it was medium red with a nose of spicy cherry with tight fruit and a mouthful of tannin and acid. From Petrichor Vineyards the 2009 Syrah Blend “Les Trois” was chunky with silky tannins, black fruit and firm acids on the finish. From Qupe the 2009 Syrah Lindquist Vineyard “Sonnies” was medium red with a nose of new oak vanilla and pickles, with a velvety long finish.

Most of the wines were from Cali but a couple that were not stand out. Damiani Vineyards from the Finger Lakes in New York and Tarara Winery from Virginia. I’ve been to the Damiani’s tasting room on Seneca Lake a couple of times and I’ve enjoyed the wines especially their Pinot Noir. Today the poured their 2011 Syrah and their 2010 Reserve Syrah. The Reserve which was decanted was very nice, not in a big and lush Cali style but with tight concentrated fruit. Tarara Winery poured their 2010 “Leap XII” which is a GMS blend (grenache, mourvedre, syrah). Very old world with a big nose of smoky bacon fat, dried mushrooms and leather with silky, earthy fruit and great balance. Another tasty wine.

Makes me want to take a road trip to Paso Robles.

One thought on “Rhone Rangers”