This past Wednesday importer Frederick Wildman & Sons held a tasting of their Burgundy portfolio barrel samples of the 2011 vintage. The wines were specially put in bottles for this tasting but back home they are still in barrel. The wines are not available for retail sale yet and they should begin to show up in the States around June of this year. These are straight out of the barrels and are just babies, the wines are still coming togther but it still was an excellent tasting if only to get a handle on the vintage. The event was held at Astra restaurant in the Decoration & Design building on 3 Avenue. I’ve been to a few Burgundy events at this venue.I began the tasting with whites at the table of Maison Olivier Leflaive. I had the pleasure of having Mr. Leflaive himself pour the wines. He poured a horizontal of nine white Burgundy. The Meursault had a big nose of honey and pineapple with a citrusy finish. The nose on the Chassagne-Montrachet was less so but still finished with a burst of citrus.  The Puligny-Montrachet had a closed nose with tight fruit but more balance than the first two whites I had. The Meursault “Poruzots” was my favorite white, you can smell the vanilla and cinamon from the oak with some oak flavors on the crisp, long finish. The Puligny-Montrachet “Champ-Gain” had a big nose of oak, vanilla and pineapple with crisp toast on the finish. I finished with the Grand Cru, the Corton-Charlemagne with oak on the nose and very tight fruit at this stage.

From Domaine Sylvain Cathiard I had the Vosnee-Romanee “En Orveaux” which on my notes I had “really stinky nose” which is not a bad thing in Burgundy.

From Domaine Hubert Freres I enjoyed the Fixin which was nice and rustic with some earth flavors and the Gevrey-Chambertin “Vielles Vignes” had some nice toasty and earthy notes.

From Domaine Alain Burguet the Gevrey-Chambertin “Symphonie” had a nice barnyard nose, it was silky if a little simple with nice balance at the end. The Gevrey-Chambertin “Mes Favorites” Vielles Vigne had a nose of black cherry with great fruit and balance. The Vosne-Romanee “Les Rouges du Dessus” had some nice silky fruit but was a little hard at the end.

From Domaine Francois Lamarche the Bourgogne Hautes Cotes de Nuit had a big nose of barnyard with the fruit on the light side but still silky. 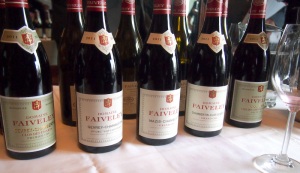 Hiding in the corner of the room set apart from the other producers were, in my opinion the best reds of the day. Domaine Armand Rousseau poured four of his reds and I really enjoyed three out of the four. I started with the Gevrey-Chambertin. Purple with a nose of crushed blackberries and slate with some notes of bubblegum and earth on the finish, tasted better than that sounds. The Charmes-Chambertin Grand Cru was purple with a pretty perfume of red flowers and slate and silky mouth-filling fruit on the palate with nice dusty notes on the finish. Very tasty as was the Clos de la Roch Grand Cru which was purple with a big nose of barnyard and crushed rocks with gorgeous silky fruit and balance on the long finish. The Chambertin Grand Cru had a big perfume but I thought the acid levels were high on the finish.

At the Domaine Faiveley table there was an extraordinary opportunity to try a horizontal tasting of fifteen of his Burgundy, four whites and eleven reds.

The starter white was the Mercurey “Clos Rochette” which had toasty moderate fruit with some minerality on the balanced finish. The Corton-Charlemagne Grand Cru had a big nose of toasty and vanilla oak with full fruit on the palate and nicely balanced on the long finish. The reds I enjoyed were the Mercurey “La Framboisiere” which was light red with salty dried herbs on the nose with some chewy fruit on the long finish. The Nuits-St. Georges “Les Damodes” had a delicate nose of barnyard and herbs with silky fruit but finishing with high tannin and acids on the finish. The Chambertin-“Clos de Beze” was medium red with a big nose of barnyard with moderate tight fruit with some heat showing through on the finish. My favorite red at the table was the Mazis-Chambertin Grand Cru, big perfume of red roses and slate with velvety fruit on the moderate to long finish. Tasty.

Overall I agree with the assesments of the wine pundits which say this is a vintage more for short term enjoyment than wines to lay down.