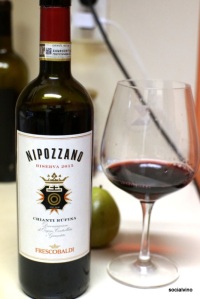 The Frescobaldi family have been involved in the political and social life of Tuscany for over 700 years. They’ve been making wine as well.

They produce wine from their six estates in Tuscany as well as producing famous wines such as Ornellaia from outside the region.

This wine is a DOCG (Denominazione di Origine Controllata e Garantitia) that comes from Rufina which is the smallest of the seven sub-zones of the Chianti region. As a Riserva it’s aged a minimum of 24 months in oak before release.